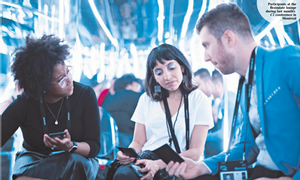 Meeting like-minded people to discuss business ideas or shared interests is made easier through a new matchmaking service.

For anyone who has ever endured awkward small talk at business networking events, the idea of a purposeful “braindate” may be a welcome antidote. Braindates are carefully curated face-to-face meetings between strangers with a common interest or a desire to learn something new.

“It’s an opportunity to skip the small talk and dive deep into a topic in 30 minutes or longer,” says Anne Brouillard, braindate coordinator from E-180, the Montreal-based company that developed the concept and the supporting matchmaking app. The premise is that some of the most meaningful learning happens between peers rather than in a formal educational institution. “Everyone has some sort of knowledge they can share, whether it’s how to run a business, code an app or cook a souffle,” Brouillard says.

While promoting products and services is against the rules, Brouillard claims more significant business partnerships result from braindates than from traditional networking events. Braindates are one of the drawcards at C2 Montreal’s annual three-day conference. Australians will have a chance to try braindating when the C2 event makes its debut in Melbourne in late October. C2 stands for commerce and creativity, and it is the brainchild of Cirque du Soleil and the Sid Lee creative agency. It’s a business conference unlike any other – a cross between Burning Man and TED Talks.

More than 8000 people attended last month’s C2 Montreal, where guest speakers included whistleblower Chelsea Manning and US rapper Snoop Dogg. Among the dizzying choice of workshops were a drawing masterclass with a former Disney animator and an Instagram storytelling session. There also were labs where participants could experience augmented reality through virtual reality helmets or have their brainwaves recorded. According to the chief executive of C2 International-Asia Pacific, Martin Enault, the aim is to propel participants out of their comfort zone to trigger creative and innovative ideas. But, above all, C2 is a place to make new business contacts. Brouillard’s team of “learning concierges”, dressed in natty orange suits, helped facilitate more than 2000 braindates in Montreal this year. Most were one-to-one meet-ups but others involved up to four people. Registered participants post a topic of interest on the Klik app and invite people to join them or book into existing braindates. Topics range from the philosophical to the technical and everything between. A facilitator introduces the dates to each other and escorts them to the reserved lounge area. Participants range from chief executives and professors to startup kids seeking advice. At the end of the braindates, participants can “klik” together their electronic IDs and instantly exchange contact details. “We had a 13-year-old boy come to C2 because it was the only way he could get in front of CEOs and vice-presidents. It would have been almost impossible for him to get that access otherwise,” Brouillard says.

Sean Callanan runs a digital marketing business in Melbourne called Sports Geek. He went to C2 Montreal and had 13 braindates in three days. “I posted that I was interested in talking about podcasting, sports marketing and Melbourne,” Callanan says. He was surprised at how many people took up his offer. One date was with the digital manager for professional ice hockey team the Montreal Canadiens. “Within 10 minutes we were diving deep and talking shop about the world’s best practice in branding and sports teams,” Callanan says. “With braindates you get into the meat of a conversation really quickly rather than the usual banter on networking floor.” Callanan turned up early to the braindate concierge desk to chat to others waiting for their dates. “Everyone there had an open mindset, ready to talk with a stranger.” Callanan expects many of his new contacts will turn into business opportunities.

Toronto-based Ioanna Antonopoulos is a group sales manager for a hotel chain. She claims the peer-to-peer knowledge meet-ups take the hard work out of finding new business. “I managed to find a potential client or supplier in all 12 of my braindates,” she says. A “self-diagnosed introvert”, Antonopoulos claims the braindates also helped break down her usual reserve. “On my last day at C2 I found myself chatting up strangers at picnic tables and in the coffee line, developing even more business along the way,” she says. According to C2’s Enault, braindates have sparked projects for social good and inspired people to change career or go back to study. “You never know where the conversation will lead,” he says. Media director Karen Eck posted the question: “What is the future of public relations?” Her braindate turned out to be with the dynamic PR officer from Montreal’s prestigious Fairmont Hotel. Within minutes they were talking up a storm and her brain was fizzing with new ideas. He offered to give her and a colleague and their prospective clients a tour of the famous suite at the Fairmont where John Lennon and Yoko Ono had their week long “bed-in” in the summer of 1969. “The tour was completely spontaneous and a very happy consequence of my braindate question,” Eck says.