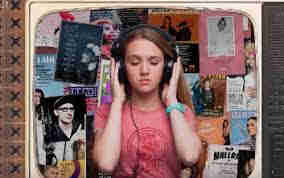 Everywhere around Australia little girls and boys are playing air guitar and singing to hairbrushes in front of their bedroom mirrors.
For the tiny fraction who will realise their dreams of becoming professional musicians, a far smaller percentage of them will be women. Although roughly the same number of girls and boys enrol in tertiary music courses, by the time they graduate, 80 per cent of the men and only 20 per cent of the women will go on to work in the music industry.
Most of the women will become music teachers.

“Somehow girls are getting the message that a career as a musician, producer, composer, director or audio engineer will never be a reality for them,” MusicNSW managing director Emily Collins said. “We need to turn that around.”

Ms Collins was part of the audience at Sonos House in Sydney yesterday to hear a lively panel discussion on how to break down the barriers of the boys’ club and showcase female talent.

The topic was: Male Advantage – how long can we sing this song?

Chairing the panel was Professor Rae Cooper, co-author of the University of Sydney’s recent report, Skipping a beat: The state of gender equality in the Australian music industry.

Her report says only one-fifth of songwriters and composers registered with APRA are women, despite making up 45 per cent of qualified musicians.

There are no women on the boards of ARIA or AIR.

“Our research into the music sector shocked me and I’m not easily shocked,” Professor Cooper said.

“If you’re a woman in music, you face a serious disadvantage and if you’re a man, you have a serious advantage.

“It’s the ultimate dude-fest,” she said.

Even going to a music festival can be risky for a woman.

Dr Bianca Fileborn highlighted around 30 per cent of women claim they’ve been sexually assaulted while attending a music festival or licensed venue.

“There are things about the music industry that facilitate and enable sexual violence to occur,” Dr Fileborn said.

“We need more women in positions of power and a zero tolerance to that behaviour in those spaces.”

Senior RMIT lecturer Catherine Strong agreed, “Men in bands like Kiss, Black Sabbath and Led Zeppelin have done terrible things to women but we swept it under the carpet because we gave them Rock God status,” Ms Strong said.

Among the panel’s suggestions for upending male dominance were calls to link grants to quotas on boards, and a challenge to the CEOs and gatekeepers to take on mentees that don’t look like them – i.e. white, cis-gender males.

Bex Davis works for the collective Listen in Melbourne promoting women and LGBTQIA music artists. She advocates calling out and shaming agents who don’t book female artists.
Jane Slingo’s approach is to give women practical hands-on training in electronic music from audio engineering to DJ-ing.

Meanwhile, a new documentary celebrating female artists is serving as a positive role model for the next generation of girls dreaming of music or film-making.

Her Sound Her Story spans 60 years of Australian music and features more than 40 musicians from veterans Renee Geyer, Tina Arena and Kate Ceberano to emerging indie, punk and DJ artists.

“For those women who are successful, the key is resilience,” said co-producer, Claudia Sangiorgi Dallimore.

“They need to be strong, vulnerable and powerful all at the same time,” she said.