‘My brain stopped working’: The helpline that steps in when musos need it most
673
post-template-default,single,single-post,postid-673,single-format-standard,select-core-1.5,pitch-theme-ver-3.4.2,ajax_fade,page_not_loaded,smooth_scroll,grid_1300,vertical_menu_with_scroll,blog_installed,wpb-js-composer js-comp-ver-6.4.1,vc_responsive

‘My brain stopped working’: The helpline that steps in when musos need it most 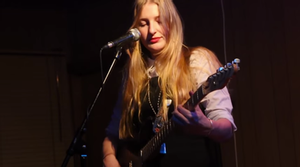 ‘My brain stopped working’: The helpline that steps in when musos need it most

Indie rock front woman Julia Wylie was flying high in 2015. She’d single-handedly booked her band JuliaWhy into 17 gigs across Canada in two weeks. She’d done it without a booking agent, tour manager or any financial support.
“I thought I was invincible,” Julia said.
It wasn’t until Julia came crashing down and ended up in hospital back home, she realised she’d had a manic episode. “I went splat. My brain stopped working. I felt depressed and couldn’t get out of bed.”
Fortunately, Julia remembered hearing about an organisation called Support Act. She reached out to them for help. “I spent a lot of time listening to the music of The Go-Betweens while I was in hospital,” Julia said.
“Then I spoke to a woman called Lindy from Support Act. She talked to me on the phone for about an hour.

“Later, I realised I’d been speaking to the former drummer of The Go-Betweens. It felt like divine intervention.” Julia spent two months in hospital and was diagnosed with bi-polar disorder.
During that time, Support Act paid her rent and helped get her back on track.

For 20 years the charity Support Act has provided crisis relief for Australian artists and music workers.

It has recently launched a 24-hour wellbeing helpline to provide counselling for anyone working in the Australian music industry who is experiencing mental illness.

Julia and the CEO of Support Act, Clive Miller (former band manager for The Go-Betweens) were part of a panel at Sonos House in Sydney to discuss why so many music artists battle with mental health and how best to support them.

According to research published by Entertainment Assist, 44 per cent of workers in the Australian entertainment industry report feeling moderate to severe anxiety – 10 times higher than the general population.

They’re also twice as likely to contemplate taking their own lives, and road crews have the highest suicide rates in the music industry.

“It’s the pressure of feeling you have to be constantly ‘on’ and always updating your fans,” he said. The hip-hop artist manages his anxiety with regular exercise, meditation, and eating and sleeping well. Touring can disrupt that routine.
L-FRESH constantly monitors his energy levels and gives himself a rating – with 10 being the worst state. “I’ve been a 10 twice this year,” he said. “If I feel nauseous, or can’t eat or sleep, I need to reduce my workload.”
He has a supportive team of friends and professionals who alert him to the warning signs and help him slow down. Bill Cullen is the managing director of One Louder Entertainment and represents big names such as Paul Kelly and Kate Miller-Heidke.
He also suffers from bi-polar disorder.
“Sometimes I know better than the artist what their limits are. Many artists are actually introverted and need time to themselves,” Cullen said. “I try not to book anyone on tour with less than 12 hours from getting off stage and getting on a plane. Enough sleep is such an important thing.”
Bill, Julia and L-FRESH all conceded that it had been a long, lonely and frightening journey before they got the correct diagnosis, treatment and professional help.

“I was treated for 20 years for something different before I was diagnosed as bi-polar. It was really hard to get a referral to the right person. And when you’re not well, it’s hard to navigate that pathway,” Bill said. Julia had a similar experience.
“It’s sometimes hard to get a GP who understands or a psychiatrist or psychologist you click with. But it pays to shop around,” she said. That was why it was crucial to have help from Support Act and its wellbeing helpline because the organisation understood music artists and their unique problems better than anyone else.
Despite the industry’s drawbacks, all the artists on the Sonos panel said music was their greatest reward.

“The two places I’m most happy are in the studio or on stage. That’s when I’m most present,” L-FRESH said. “If I feel terrible, I’ll write a song and it becomes my source of strength,” Julia said.
“The magic of music is that it can heal and inspire you.”

Bill Cullen summed up the vibe in the room: “It’s not the music industry that makes you depressed, it’s the s-t that goes with it. Music can be the beautiful escape.”